November 30, 2014
(Greetings. I've returned from a few days away. During those days, I didn't buy one thing or view one scintilla of college football. But I know I'm still an American citizen because I ate like the world was ending tomorrow. Now that I'm back, it's time for Cardboard Appreciation. This is the 217th in a series): 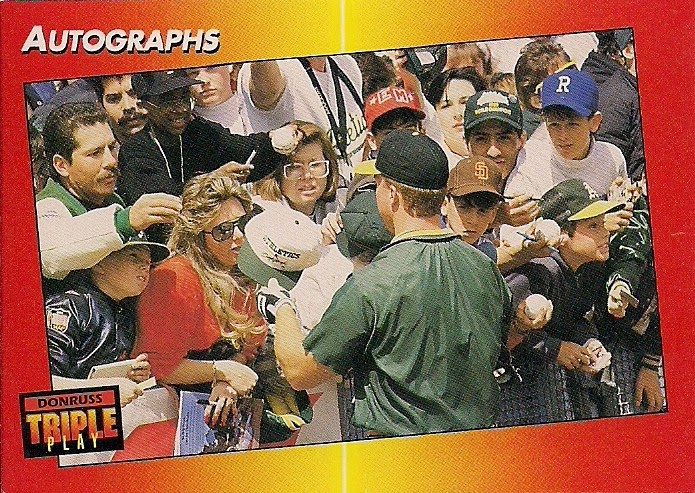 Autographs. I value them, yet I can't be bothered to acquire them.

Does that make sense? It does to me. Let's see if I can explain.

I do enjoy an autographed card. I like the idea that a major league player spent a couple of seconds to sign a baseball card that I own. I feel a connection to the player -- no matter how slight -- because he signed my card.

But I view those cards almost as an "extra" in my collection. They aren't the reason why I collect. Autographed cards are almost like the gimmick in my collection. If I were to give someone a tour through my cards, I'd go through all of my sets and then all of my Dodgers and then -- oh, yeah, here are some flashy autographs of some guys I keep on the side.

No doubt that unnamed tourist would be especially interested in the autographs -- far more interested than in whatever sets I completed. Autographed cards speak to the memorabilia collector, and to people who don't even collect. A signature almost validates the hobby for them.

But me? I can take autographed cards or leave them.

In the early years of this blog, I collected some autographed cards through the mail. They are the autographed cards that I value the most, because the player was important to me and they took the time to respond to my request. But I don't do that anymore. I decided that it was not where my collecting interests lie.

As for flagging a player down at a ballpark or standing in line at a memorabilia show? Sorry, there is nothing in my personality that would allow me to do that. Not even when I was younger.

Aside from all of the line-standing and pleading, what would happen if someone snapped a photo of me doing that and then placed it on a mass-produced baseball card?

What do those folks on the card above think 22 years later of how they looked? It must be like viewing your old family photographs. Except a whole bunch of strangers can see them, too.

That's why the back of this card shouldn't read like this: 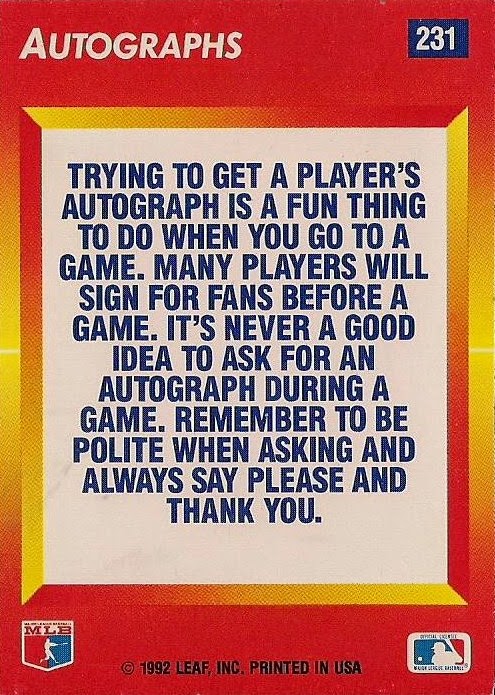 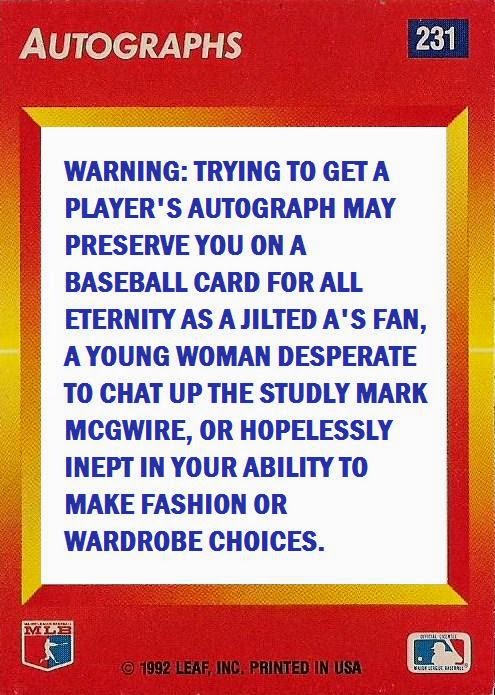 These are the chances you take asking for autographs.

Laurens said…
In my formative years, I would never think to get an autograph but starting in my teens and up through now, it's autographs first then collecting the cardboard for itself.

If there was no way to get an autograph besides certified autographs - then I would probably cease to collect cards all together.
November 30, 2014 at 8:26 PM

Dan said…
I love collecting autographs, it's the reason that I still buy cards. However, I have zero interest in pulling an autographed card from a pack. Those, I immediately list on eBay. Autographs I acquire in person, I would never even dream of selling.

Zippy Zappy said…
I love getting autographs. To the point where the minute I get a card that hasn't been scribbled on I usually wonder "hmm, I wonder if I can get this signed..." only to find out that nearly half of the guys disappeared after being released from their double-A team two years ago.
November 30, 2014 at 9:26 PM

Jason Presley said…
I loved getting autographs at games as a kid, but now I'd rather not inconvenience myself or the player for something that doesn't really mean anything to either of us. I've still got a couple dozen or so signed cards that I got as a kid, but I find my attachment to them fading to the point where I have little trouble trading them to someone who actually cares. I only tried TTM 5 fimes as a kid. Two successful (Jimmy Key & Larry Arndt), three failures (George Brett, Ruben Sierra, Red Schoendienst). Now that I collect guys who I know would sign, I no longer have any interest in pestering them for a scribbling.
December 1, 2014 at 12:04 PM