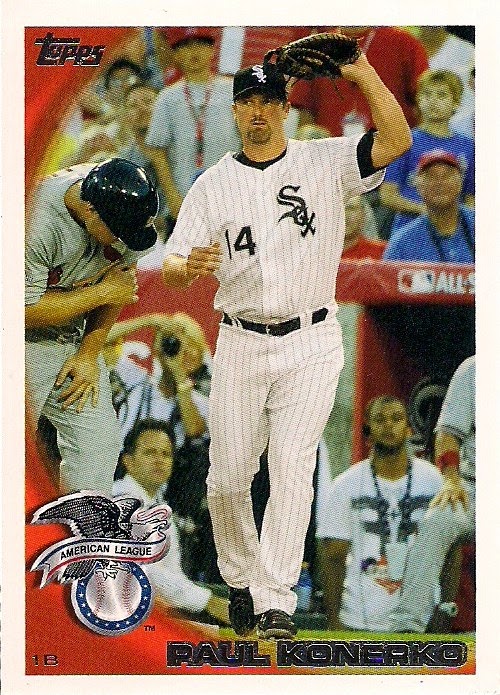 This is a mess of a night card. So many people, so much going on that it's difficult to absorb and therefore difficult to appreciate.

So let's break it down to see if I can like this thing any more than I do.

On the surface, this appears to be a simple throw to first base to keep the runner close. But there's more to it than that.

I'll start with the camera person. He seems particularly intent on capturing some action. Something interesting must have just happened. More interesting than a pitcher throwing to first.

You know it's the All-Star Game because of the number of people wearing lanyards. Here's an older guy who got some exclusive seats because of his lanyard. He seems intrigued, but not particularly excited.

This kid also appears to be wearing a lanyard. And he appears to be an Angels fan, which would be appropriate because the All-Star Game in 2010 took place at Angel Stadium. He's standing up. When kids get excited they stand up.

Here is another kid. He's standing up like the other kid.

I don't know who this person is, but he's practically stealing the photo. Is he someone famous? A guy who wears 36 on his uniform, maybe? He's got a lanyard, too. But he seems very under-dressed for someone sitting in the dugout of an All-Star Game. 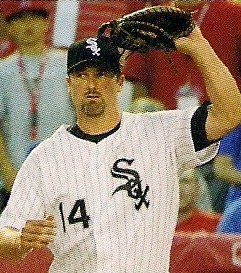 Now to the play. Paul Kornerko seems more concerned with something going on elsewhere on the field than the play there at first base.

And this Cardinals player is not diving back to first as someone who might be picked off. He's ducking into first, to avoid the throw, possibly from an infielder.

At first I thought this player was Albert Pujols. But baseball-reference says that Konerko came into the 2010 All-Star Game as a pinch-hitter in the sixth inning and then took over first base. By then, Pujols was out of the game.

Studying the game action further, this play appears to have happened in the seventh inning. With one out, the Reds' Scott Rolen singled. The next batter, Matt Holliday, also singled, sending Rolen to third. The player ducking into first base is Holliday. And Konerko is looking elsewhere because he's keeping his eye on Rolen in case he decides to advance home.

Konerko's effort was for naught because three batters later, with the bases loaded, Brian McCann unloaded a three-run double that put the National League ahead and won the game for the N.L.

And that's why everyone in the stands was excited. They knew something was about to happen.

One more interesting person in this card.

That's Eric Karros, working for Fox, which was covering the game.

Karros was the first baseman for the Dodgers when Konerko was coming up in L.A.'s organization. The Dodgers eventually dealt Konerko to the Reds because there was no room for him with Karros there.

And that's the story of the 2010 Topps Update Paul Konerko All-Star card.

A little too much going on there, but at least I know a little more about it now.

Commishbob said…
What does the mystery guy with the #36 shirt have tucked into his shirt or jacket or whatever he's wearing? It appears to be some sort of doll or something or are my eyes playing tricks on me?
November 8, 2014 at 10:37 PM

Nick said…
I just recently picked up a copy of this card. Never noticed all the background noise on it until now, and I'm especially fascinated by the Karros cameo.
November 9, 2014 at 2:12 AM