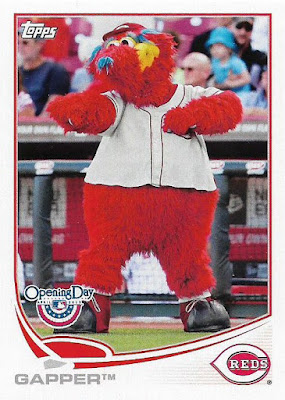 The 2017 Topps Series 2 checklist is out. I did a quick review of it to find the Dodgers. No Cody Bellinger, so look for that in Update. I'm sure he'll be on like five cards in that set.

I also looked to see if there is a card of the Brewers' Eric Thames and there is, at No. 603. When it arrives in packs, Thames will officially become a "gapper."

That's what I call players who have disappeared off cards for at least three years and then returned. I've been fascinated by this phenomenon ever since I was collecting as a kid. A number of years ago I started referring to them as "gappers" in my head. I'm sure that term has some sort of negative connotation elsewhere, but I don't care. If the Reds can send out a bright crimson beast every night and call him the same thing, then I can, too.

I'm assuming there are plenty of gappers from the past 25 years besides Thames, who last appeared on cards in 2012. But I'm going to focus on just a few from the '70s and '80s, because that's when I first became familiar with the occurrence and when I thought it was really wild. 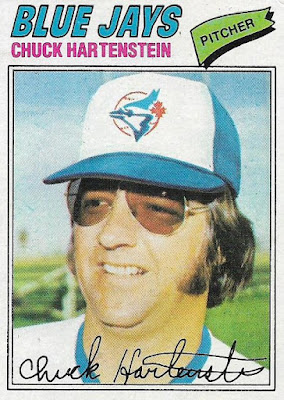 I reacquainted myself with the "gapper" phenomenon when I showed this Chuck Hartenstein card on Twitter a week or so ago. Hartenstein, doing his best Elvis impersonation here, showed up on a Blue Jays card after not appearing on a Topps card for SEVEN YEARS!

That is some kind of gap, one of the largest that I know. 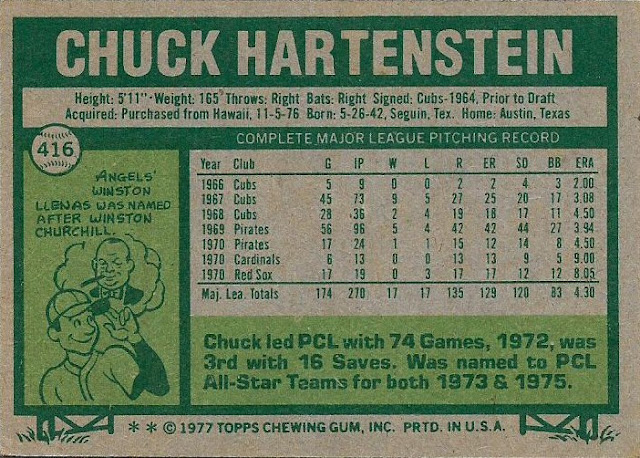 The statistics on the back stunned me. His most recent stats were from 1970! My goodness, where did he go???

I had little appreciation for the minor leagues at the time -- heck, I didn't even know who Winston Churchill was -- so the write-up at the bottom was meaningless to me. It was as if Hartenstein rose from oblivion after seven years and landed in an airbrushed Blue Jays cap. 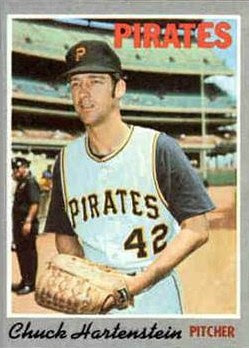 This was the previous time he had been on a card, in the 1970 Topps set. He also showed up with the Cubs in the 1960s. He looked a lot different then.

Hartenstein's appearance with the Blue Jays was his final one. With the exception of some minor league cards (including one of those retro phone cards), he didn't appear again as a player.

The same can be said for pitcher Steve Dunning, another gapper. 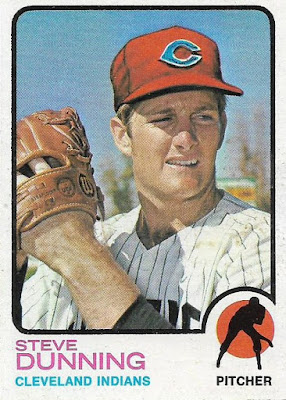 I was happy to acquire this 1973 card recently because I knew that it was Dunning's last card for awhile. He appeared in Topps sets for three straight years, from 1971-73, and then nothing.

He didn't resurface until the 1978 Topps set. 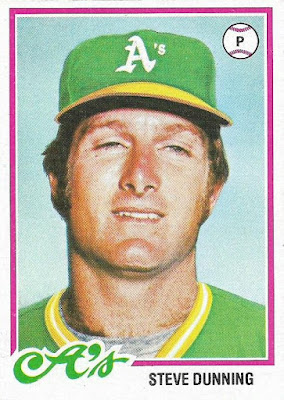 By this time the world was different. The A's dynasty that we knew in 1973 had been disbanded and the A's were now the worst team in the league, picking up scraps, which probably explains why Dunning was back on a card for the first time in five years.

As kids, we had no idea who Dunning was. The early '70s was "a long time ago" to a kid that started collecting in 1975. Anybody who appeared before then better damn well be Ernie Banks or Willie Mays if they wanted to be known by us. 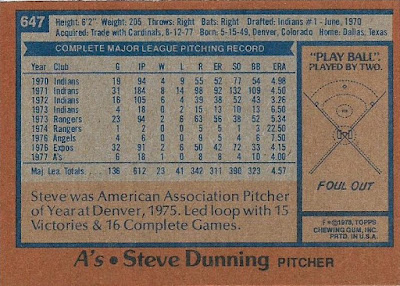 You can see some solid time for the Rangers in 1973 as well as the Expos in 1976. Makes you wonder why Dunning didn't show up on a card for five years.

It's possible he didn't come to a contact agreement with Topps, which is the reason players like Rusty Staub and Barry Bonds disappeared off cards for awhile. They aren't true gappers though. They stayed off of cards out of their own intent. True gappers would really like to get on baseball cards. They just aren't good enough to do so. 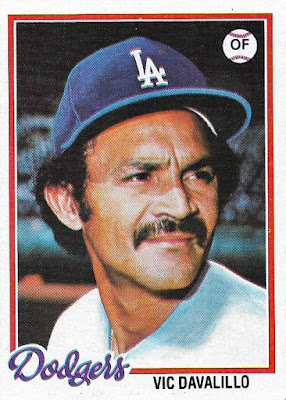 Speaking of 1978, my appreciation for gappers was solidified the very next year after the Hartenstein card appeared. In 1977, the Dodgers purchased Vic Davalillo from a Mexican League team and he paid off during L.A.'s postseason run.

Davalillo will always be remembered in Dodgers' lore for putting down the bunt single that started the Dodgers' two-out rally from two runs down in the ninth inning of Game 3 of the 1977 NLCS against the Phillies.

He may be airbrushed into his Dodgers cap and uniform, but I was very happy to see his card in the 1978 set, and besides, he's shown in a genuine Dodgers uniform in 1979 Topps.

Davalillo, who was a well-known player for the Indians in the 1960s, disappeared off of Topps cards after the 1974 set. After being released by the A's in May of 1974, he left for the Mexican League for three years. 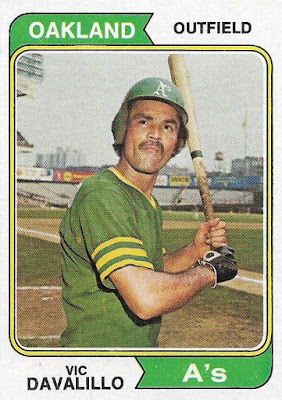 Digging up players from the Mexican League became a thing for the Dodgers during the late '70s/early '80s.

After the success of Davalillo, the Dodgers tried one more time with a gapper, this time a pitcher. 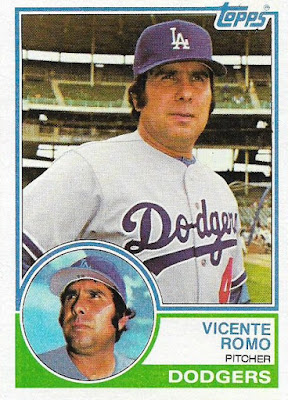 Romo had not pitched in the major leagues since 1974. He had been in the Mexican League ever since until the Dodgers purchased his contract. Romo made his first appearance for the Dodgers in May 1982 and was even placed in the starting rotation at the age of 39.

Romo didn't do well as a starter, went back to the bullpen, then hurt his leg and was out for the rest of the season, never to return to the majors. I'm a little surprised Topps made a card of him in 1983, but I'm glad they did. 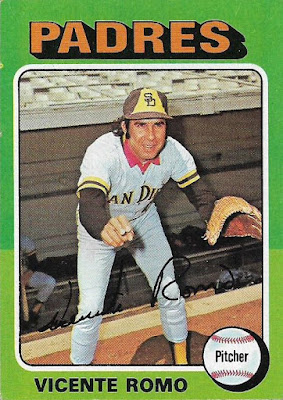 That's partly because Romo has the largest gap between cards that I know of from this time. His previous card to the '83 card is in the 1975 Topps set, a span of eight years. When Romo pitched a victory for the Dodgers in July 1982, it was his first win as a starter since 1970!

That is some gap. 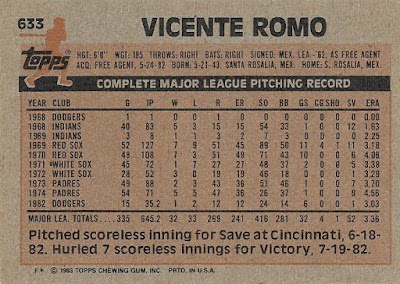 There you can view the giant leap in the statistics.

As you can see, I still get excited recounting these instances. I'm sure there are more recent examples that I am ignoring and I feel bad about that.

Because, like the Eric Thames instance, these gappers are always worth celebrating.

They never stopped trying, they never gave up, and even if it didn't last long, they made it. Again. The baseball card proves it.

John Bateman said…
Great Post - looking at cards in a way no one else can. The great thing about the 1977 and 1978 Topps sets were that the MLB had 2 (3) expansion teams (including Oakland) in 1977. A lot of different players that appeared on cards that usually would not have.

Mike Matson said…
It is an interesting topic for sure..
Of course, with nothing like Baseball Reference around in the 70s and 80s, it is easy to imagine a player just disappearing or going into stasis until pulled out at some time in the future.
June 6, 2017 at 10:16 PM

Kevin said…
a few i can think of off the top of my head
Warren cromartie
Jerry hairston
Danny boone
June 7, 2017 at 7:33 AM

Anonymous said…
Tremendous idea for a post! I remember Chuck Hartenstein's airbrushed Blue Jays card well and I'm still on the hunt for his 1977 OPC with the Spring Training photo, but had absolutely no idea that he'd appeared on cards from 1969 to 1970. Guys like Davalillo and Romo fell into the "Hey... he's right!" category. It might have registered at the time that I hadn't seen those guys in a while, but I probably didn't really identify them as gappers.
June 7, 2017 at 7:40 AM

Fuji said…
Great post. This is such an interesting topic. Steve Howe was the first and only guy that popped into my head. Gonna continue to rack my brain in my free time though.
June 7, 2017 at 8:59 AM

night owl said…
Good additions. I knew about Hairston. I think Cromartie and Boone escaped my memory because their card returns both came in non-Topps products.
June 7, 2017 at 12:23 PM

pdxpratt said…
Great topic- the guy that came to mind for me was Cromartie- I was always bummed that Aaron Holbert didn't get a major league card in 2006 after having been gone for nine years. A recent example (albeit with a needed asterisk) of a long gap would be Adam Greenberg. I think the proliferation of "pre-rookies" might make this a little more common- it's too bad John Lindsey didn't have one in the 90s ahead of his 2011 Dodgers cards.
June 10, 2017 at 4:49 PM