What I've been missing 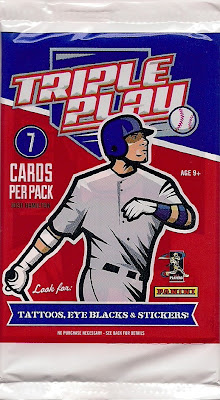 If you've read this blog for long enough, you might recall that August is a terrible time for me for cards. Money is tighter than at any other time of the year, so I usually miss out on whatever new products are available at this time.

I haven't been in a Walmart or a Target, or any other place that sells current cards, for more than two weeks. That may not seem like long to you, but for someone who makes a weekly habit of checking out the cardboard offerings, it feels like months.

Since that time, the following baseball brands have arrived:

Feeling my skin starting to break out because it's grown accustomed to the touch of new fake cardboard, I cobbled a few dollars together to buy some random packs from Target.

Finest was not an option because it's too superior (*sniff*) to show its face in a department store (and my hobby shop is apparently having an unannounced liquidation sale, so I don't think there is any Finest within an hour from here).

Chrome hasn't hit my area yet.

I know some people groan about this product. "Cartoon drawings with no logos put out by Panini?"

Yes. Exactly. Don't you love it?

I don't understand when people say that this is a product meant for kids. I have seen, in person, kids buying sports cards from the card aisle exactly twice in all my visits to card aisles going back to 2008 -- maybe even 2006. (If they're there, they're buying magic cards or yuggie thingies).

That's not to say kids don't still like sports cards. I see them at card shows all the time.

But Triple Play can be for adults. I'll bet the previous incarnation of Triple Play by Donruss was bought mostly by adults. And that was in 1992!

So, this adult bought four packs of Triple Play. It cost me 4 dollars. Awesome. 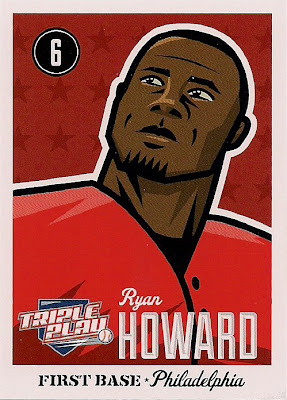 That's your typical base card.

Now, we can pick this apart for the next seven hours, but I prefer to observe what I like about this set.

The card is bright. The cartoons are drawn in a bold fashion (they remind me of a past Cartoon Network show, but for the life of me I can't figure out which one). The players look like superheroes.

This is all good stuff.

In typical fashion, I like the base cards in this set best of all. 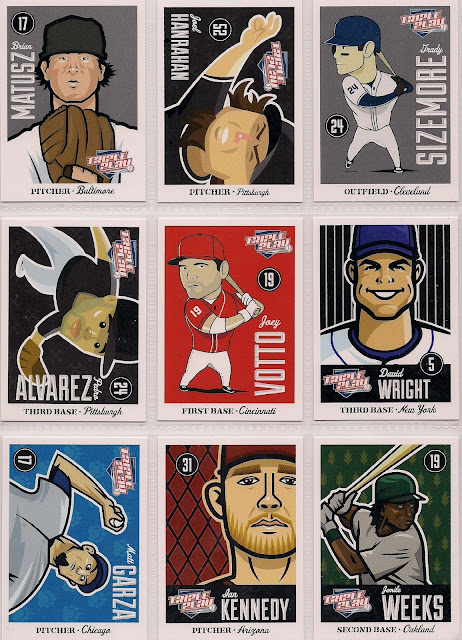 Those are the rest of the ones I received. The Hanrahan and the Votto are my favorites.

You get four base cards in each pack. The rest of the pack is filled with stickers, puzzle pieces, tattoos and other random stuff. 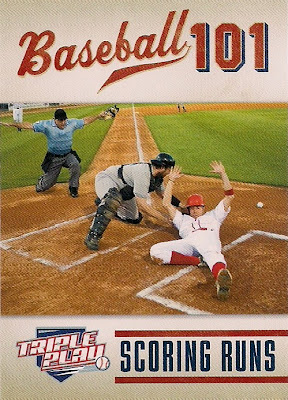 This is considered a base card, although it's not of a particular player. It's part of a subset. The back of this card is a very in-depth, yet very basic explanation, of what a run is in baseball. Some of the write-ups are definitely intended for kids, or baseball neophytes.

By the way, I have no idea what that picture is from -- doesn't appear to be a real game. 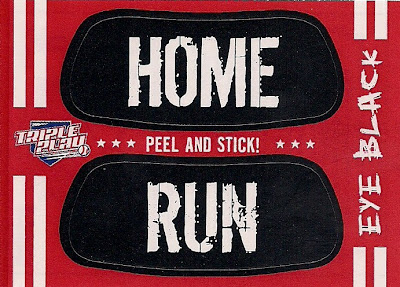 Eye black stickers. I got two of these -- the other one has flames on them. I may peel and stick these on my way into work and see how many different stares I get. 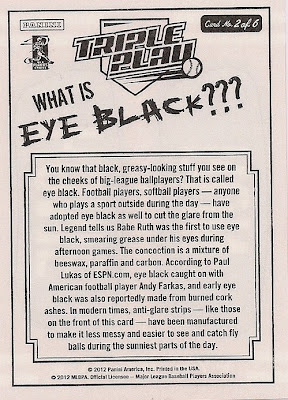 The back of the stickers feature abundant information on eye black. This is fantastic. As a kid, I always wondered what eye black was (and when I found out it was basically beeswax, it freaked me out). But there's lots of stuff here I never knew. 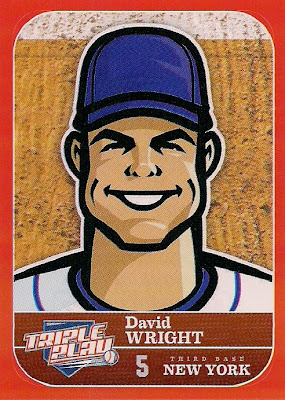 There's one of your stickers. I think I'll send this to Dinged Corners, now that they're posting again.

You can get stickers of player cards or you can get plain, random stickers, like this: 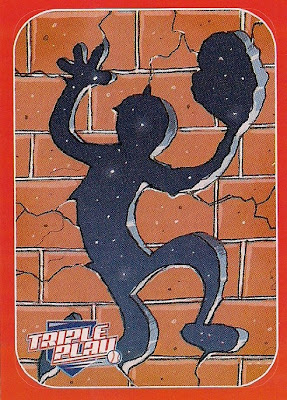 Why, I believe that's an Awesome Night Sticker! 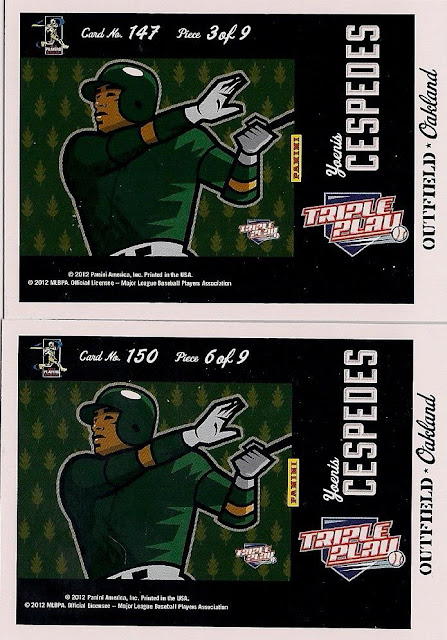 Each pack has two puzzle pieces.

I received two Yoenis Cespedes cards (you need 9 to complete a puzzle). 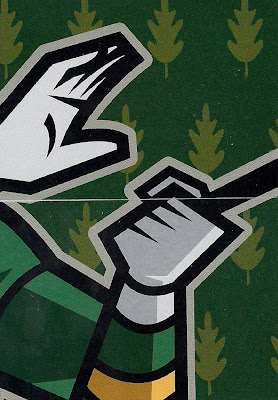 His hands are ready to go! 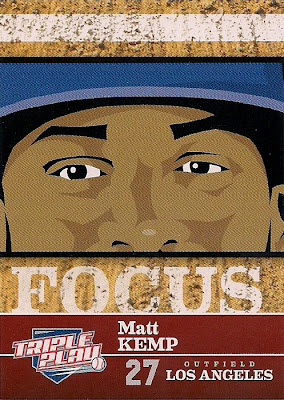 I was very pleased to get the Kemp card. The only Dodg ... oops, LOS ANGELES card I pulled.

Kind of weird. Reminds me of the Pinnacle Shades set from the early '90s.

I'm not as crazy about all the extras, the subsets and the inserts. Those definitely have a kid feel.

But I really like the base cards and I do appreciate the entire set. And I never thought I'd ever say that about a Panini baseball set.

I have no intention to try to complete it, although it might be fun. I have too many other collecting goals right now.

But this adult won't hesitate over picking up a few more packs of a "kids' product" the next time I'm in the card aisle.

Which I hope will be some time before October.

Nick said…
I've come around on this set. I'll definitely be picking up a few more packs next time I find myself in a Target.

Although I still think that kids were part of the target audience for this set, I'm sure many adults will end up buying and loving them as well.

Although I did see a couple kids rummaging around the card aisle when I picked up my first helping of Triple Play last week.
August 25, 2012 at 7:31 PM

Jeff said…
Looks a bit like Danny Phantom to me. Although my kids disagree.

Brad's Blog said…
I like the guy for it attitude of the new dodgers owners, money who cares lets get the best player available.
August 25, 2012 at 8:56 PM

Dawgbones said…
Card #300 in the set is a Jersey card. I pulled one out of the second of three packs that I bought last week myself. I haven't had time to blog about it, or much of anything lately. But I do like this set, I am a sucker for cards on the cheap, but these don't seem cheap to me. They look great and don't take a big hit out of the checkbook, which is always a good thing.

Commishbob said…
I don't remember seeing these before. Nothing wrong with collecting stuff targeted towards kids. The hobby at its heart is supposed to be just that.