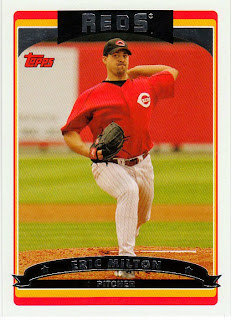 Can I say this? OK, yeah, I'm gonna. It's official. The Dodgers are untouchable. Bullet proof. Omniscient. Omnipotent. And all those other "omni" words.

They pitched Eric Milton last night. And they WON! I'm stupified. This is the same guy who I once held up as a symbol of why the Reds would never be a winning franchise again. I actually said that out loud.

So, I'm just going to get in the passenger's seat and let the Dodgers drive. They don't need my help. No more comments here about what the Dodgers should be doing or aren't doing. No more dispensing of advice. And if you're coming here for insight about the Dodgers on your fantasy team, or a quick gambling tip, then you are:

1. Going to be disappointed
2. The worst gambler in the history of time

I will say no more. Because the Dodgers don't need Longoria or Lincecum or Santana or Greinke. Hell, they don't even need Chuck Norris in a catcher's mask. Because they have Uncle Miltie!

Sheesh. Who am I to argue?

Anonymous said…
The same former Minnesota Twin Eric Milton? I always wondered what happened with him.
May 27, 2009 at 10:17 AM

Mark Aubrey said…
...since Manny got himself suspendedWait. Weren't you just railing against people talking about how the Dodgers were doing since Manny left?

Not quite the same, but still...

I have a problem with people's assertions that Manny is the entire Dodgers team and that the team will flop without him. When people say that the Dodgers are the Nationals without Manny, that annoys me.

That doesn't mean I didn't have some level of concern about the team when he left. I'm a fan. Fans worry.

My problem with media types saying "the Dodgers are so-and-so since Ramirez was suspended" is that they interject it into EVERYTHING without any thought as to whether it's relevant or not. If you're talking about how the Dodgers' clean-up hitters are hitting .224 since Ramirez left, than yeah, OK, you can mention it. But babbling about it on every Dodger highlight, mentioning him after the Dodgers win 2-1 and the star of the show is a pitcher, that irks me. Context is important.

There's a "star mentality" in the media in which there's a tendency to mention the star on the team regardless of whether he has anything to do with the victory or not. I don't know how many Associated Press stories of read, in a variety of sports, in which the lead was about Terrell Owens or Alex Rodriguez and they didn't have squat to do with the outcome of the game.

That's what bothers me. I don't have problems with people mentioning Ramirez's absence. Just back up your damn statement.

Kevin said…
"They don't even need Chuck Norris in a catcher's mask."

Mark Aubrey said…
Thanks for clarifying.

Hey, did you hear that Manny's been suspended? And the Dodgers are doing okay without him.

Not many can tell jokes like Berle did. Maybe George Burns, Bob Hope or Groucho Marx.